Questions about Twitter's notice of possible attacks by “state-sponsored actors”

It has been several weeks since Twitter alerted some of its users that so-called state-sponsored actors may have attempted to hack their accounts. Some of us who received this alert published the news on Twitter, and some of us talked to the media. The incident generated considerable interest and puzzlement. 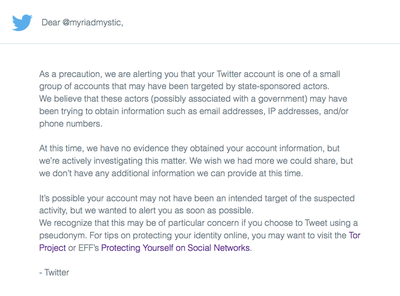 We hoped to learn more by and by. Some of us sent inquiring emails to Twitter. We expected follow-up reporting by journalists who had read between the lines, had connected these alerts to other similar ones sent by different companies, or had talked to inside sources at Twitter.

Today, we are as clueless as when this started. We await answers to the following questions:

Nature of the attacks

We, the undersigned, are owners of accounts that were notified of a possible attack. Other Twitter users have decided not to publicly reveal that they were targeted.

We all want to know how we got into this.

If anybody reading this post has knowledge or insight into what happened, please share it with us.

And to our friends in the news media: Feel free to contact us if it helps your reporting.